Problem: Scoliosis
Result: Back to a healthy, active lifestyle

As an active, energetic nine-year-old, Aubrey was attending a gymnastics class when her coach saw something interesting about her stance. As she bent over, there was a noticeable hump on her right side, and the question of “do you have scoliosis?” was asked. Because she wasn’t suffering any pain, Aubrey had never mentioned it to her parents prior to that day. However, after bringing the coach’s question to their attention, her crooked stance and right shoulder blade were evidence enough that something was wrong.

Aubrey’s parents pulled her out of gymnastics, and took her to see Dr. Thomas. She was fitted for a brace and then underwent two and a half years of monitoring to prevent the curve from getting worse. While this process wasn’t a cure, Dr. Thomas wanted to ensure that Aubrey was receiving the best care possible. “He just cared about her so much and didn’t ever rush,” said Aubrey’s parents.

In June of 2012, Aubrey underwent surgery to correct her scoliosis. “I think her curves were considered to be pretty extreme,” said Aubrey’s parents. Because Dr. Thomas waited until the a specific system was available for her, he was able to take the top curve from 63 degrees to 5 degrees and her bottom curve from 71 degrees to 7 degrees. Despite the severity, Aubrey’s parents were pleased with her care, stating the procedure “was the longest 13 hours of my life, but I’m so grateful he was so caring and didn’t rush through it”.

About her recovery, Aubrey’s parents said “Dr. Thomas promised me if we would do what he told us to do, she would recover quickly.” After countless long walks and painful sitting, Aubrey made a substantial recovery in nearly two weeks. 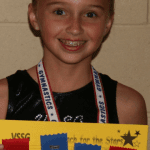 Aubrey as a child, winning awards for Gymnastics 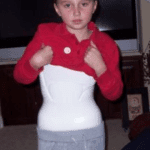 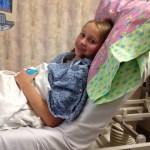